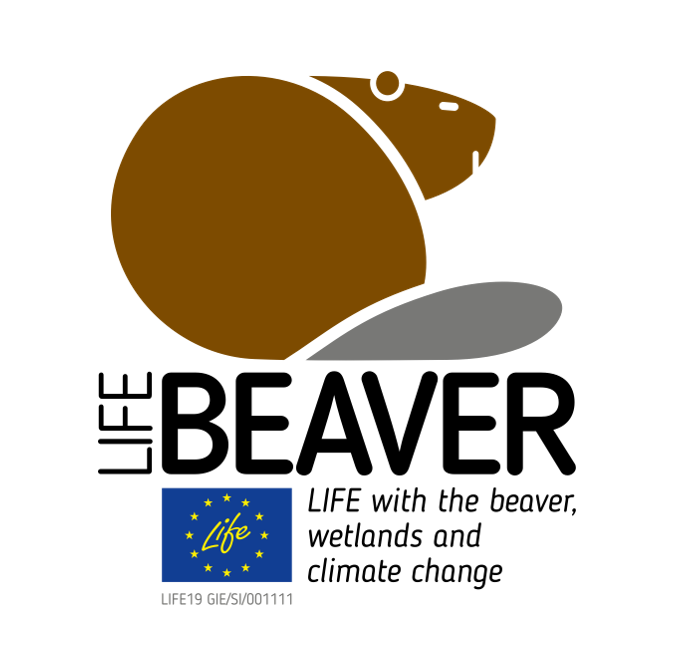 The European beaver was almost eradicated in most of the European countries good two hundred years ago, after hundreds of years of merciless hunt and chase, the species ending on the verge of extinction. In the last few decades, it is successfully being reintroduced back to its native home range with the help of many reintroduction programmes, such as e. g. in Croatia, from where it naturally spread across the border to the neighbouring Slovenia. The beaver is successfully traversing many obstacles in cultural landscape, even river barriers. However, it is with enormous strain tackling obstacles in human mentality of selfish tendency to overexploitation of natural resources, falsely believing they are in inexhaustible amount, bending them to human will and need. The beaver is likewise adapting its riparian habitat to its own needs, however, at the same time, it is also maintaining it and keeping it hospitable for other species – as well as for humans: it is increasing biodiversity and ecosystem dynamics of inland waters.

The recent return of the beavers to Posavina in Croatia 24 years ago counted to a total number of 85 animals. Today, the largest population of the biggest European rodent by far, counts over 10.000 animals; they are spread throughout all of Croatia, parts of Bosnia and Hercegovina, Serbia, Austria and Hungary. The beavers also expanded to Slovenia, utilising Sava, Mura, Drava and Kolpa as commuting routes from Croatia. The beaver, present in both countries today, is considered to have a favourable conservation status. This is also one of the reasons why two different Croatian partners joined forces: The Faculty of Forestry in Zagreb, which was responsible for the reintroduction of the beavers to Croatia in the first instance, and the Museum of Ivanić Grada, located within a small town Ivanić Grad, near the area where first beavers were released into the wild. The beavers were adopted so passionately by the locals of the town, that they are now interwoven with almost all of its public life, presenting a perfect example of a possible peaceful coexistence between man and beaver.

The beaver is returning to a significantly modified human environment: in the last century Europe alone, we managed to destroy between 50 and 90 % of wetlands, of which 377.000 km2 were used for new agricultural areas. In light of the current climate change, we can therefore already feel the effects that these impacts of missing habitat have on our environment. We can ask ourselves, whether it will be possible to retain the natural water flow in our landscape and keep it clean from various harming pollutants with which human civilisation is burdening it with? How will we prevent, or at least reduce, the flooding events and erosion and establish CO2 sinks, how are we going to stop the devastating drop in species biodiversity in our predominant environments? The beaver can help us with these difficult tasks at hand, but we first need to familiarise ourselves with this vaguely known species in detail and understand its ecology, which is one of the main goals of this project. The experts are estimating the value of the ecosystem services, which wetlands are providing us with, to be at least 16.000 €/ha/year. About 150 km2 of wetlands can purify estimated 32 million m3 of water per year. Wetlands, which are created or maintained by beaver, can locally have even higher value. An area of 150 km2 of wetlands can purify 32 million m3 water per year. All these extensive wetland areas can be maintained and expanded for free by an army of 100.000 ecosystem engineers – beavers.  With the help of one of our project partners, the Forestry Institute of Slovenia, who has much expertise with data modelling, it will be possible to estimate the value of the ecosystem and beaver functions. Based on these assessments, we will also be able to create a model of potential spread of the beaver population, to understand where its natural limits lie.

We will try to avoid from putting too much emphasis on comparing the pros and cons of various animal groups in educational and awareness raising tasks included in this project. This way, we will prevent utilitarian thinking, where only the maximisation of species benefit in the ecosystem is sought after. Thinking about natural impacts beaver causes with its key engineering behaviour in aquatic ecosystems, will be shared amongst widest of audience. Particularly, we will direct it towards various target groups, which have most contact with the beaver: farmers, foresters, land owners, water managers, fishermen and hunters. We will also try to have an influence on agriculture, water management and environmental politics. In this light, we will also test how the system for »damage« evaluation of wild animal activities and compensation scheme assessment works. Requests for financial damage compensation, which beaver causes in Slovenia, are on the increase with every passing year. Will the beaver, whom we drove to the edge of extinction and destroyed most of its living environment, also send us a bill for damage compensation? When will we discover that the main damage, we are causing, is really to ourselves and that the beaver can only help us reverse it?

Therefore, now is the time for people to adapt to the changes brought about to our landscape by the beaver and not the other way around.  Us, project partners, will do everything we can for the returning beaver to be also accepted by the people living along riparian habitats of Slovenia and Croatia. We will especially be pleased, if our project results can also help our neighbouring countries, where beaver already inhabits, or where it can spread further using natural pathways. Therefore, we can proudly say that LIFE BEAVER project welcomes the beaver’s return.

Year of the LIFE call for proposals: 2019

Project title (ENG):LIFE with the beaver, wetlands and climate change

We use cookies to ensure that we give you the best experience on our website. If you continue to use this site we will assume that you are happy with it.OkRead more